579 are viewing this item 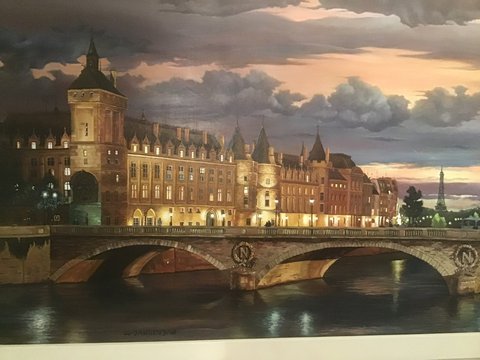 For sale beautiful painting Geert Jan Jansen - Paris - very detailed with the Eifel Tower in the background - dimensions 102 cm x 72 cm - Geert Jan Jansen was born in Waalre 1943. Geert studied art history in Amsterdam, His father was a technician at Philips and an art lover. During his studies, Geert became friends with Machel Podulke who owned Galerie Mokum in Amsterdam. Jansen started organizing exhibitions, and later opened the Jacob and Raam galleries. When his company started to lose money, he counterfeited his first Apple. Encouraged by this, Geert went to galleries and to his surprise they were approved by Christies in London. And was sold for a record amount. Safe houses throughout Europe have sold Geert's work. In the meantime, Jansen moved with his girlfriend to France, Where he was arrested in 1994. During the raid on 16 May 1994, 1600 paintings by Karel Appel, Jean Cocteau, Pablo Picasso, Raoul Dufy, Ferdinand Erfmann, Charles Eyck, Leo Gestel, Henri Matisse, Joan Miro, Bart van der Leck, among others, were found. And after much investigation convicted in 2000. In the meantime, Jansen also bought real art, and the French judiciary was puzzled as to which ones were genuine or which had been hand-made by Geerts. In the end, the painter was imprisoned for 6 months. In the years that followed, the judiciary returned hundreds of works to Jansn. Nowadays Geert works in the Netherlands ( Beverweerd ) It was agreed with the senior gentlemen that Geert will continue under his own name. Jansen has done many exhibitions, including in Zeist castle and in America. With exhibition at Celebration of Monet, Klimt, CoBra, Banksy, van Dongen, and Schiele. In 2018, Jansen participated in the performance of ,, True Copy , by the Antwerp Theater Company Berlin. Following the performance, Jansen copied Picasso's Tete d'Arlequin. This work went missing after an art theft in 2012. The painting was found in Romania, This case made the international press, as it was believed that the Original had been found.

Oh no, you missed out! This item is already sold. We do have many more amazing items available.