58 are viewing this item 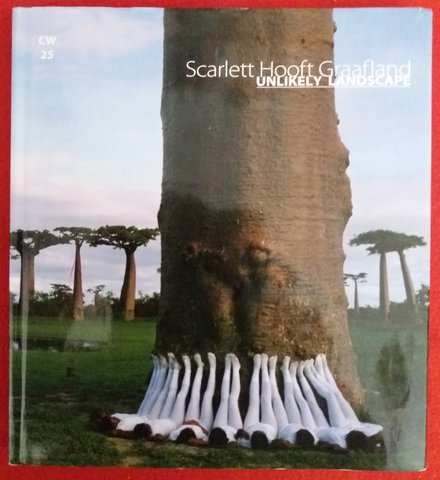 Titel: Scarlett Hooft Graafland - Unlikely Landscape (Camera Work Vol. 25) Authors: Scarlett Hooft Graafland; Maarten Doorman; Sherry Macdonald; Florence Mackenzie; Tineke Reijnders et al. Language: Text in Korean, English and Dutch. Uitgever: Seoul, Museum of Photography 2014 Binding: Hardcover, Cloth covered boards with dust jacket Number of pages: 120p Signed by Scarlett Hooft Graafland. ISBN: 9788993748499 A retrospective of Graafland's photographs of her performances and installations in Madagascar, Holland, Norway, Canada, China, Bolivia and Iceland. Traveling to the most isolated corners on earth, for Scarlett Hooft Graafland these austere surroundings become live actors in the highly choreographed performances that she stages there. Whether it is the salt desert of Bolivia, the Canadian arctic, Madagascar, Socotra island or Vanuatu, Scarlett merges with the surroundings and its local culture. After weeks of preparation, working closely with inhabitants, Scarlett creates a scene, where local social issues take center stage, and the vast surreal landscape becomes the chorus of a classical tragicomedy that silently comments on the subject. Inhabiting the border between straight photography, performance, and sculpture, Scarlett Hooft Graafland’s photographs are records of her highly choreographed performances in the salt desert of Bolivia, the Canadian arctic, rural China, the lava fields of Iceland, and the Dutch countryside. Fascinated by the surreal beauty of the harsh natural landscape, she utilizes this as her canvas. Scarlett Hooft Graafland’s surreal, dream-like photographs provide the lasting record of her carefully choreographed, site-specific sculptural interventions and performances in some of the most isolated corners of the earth. The recent exhibition Discovery brings together more than a decade of exploration, from the salt desert of Bolivia to the desolate Canadian Arctic, the island of Madagascar and the remote shores of Vanuatu, where her interactions reflect an exchange between the boundless realm of nature and the relative confines of culture. Scarlett Hooft Graafland showed her work in an exhibition entitled Soft Horizons at Amsterdam’s Museum Huis Voor Fotographie Marseille. Her photography features surreal landscapes, inhabited in unexpected ways by man. Scarlett Hooft Graafland has studied at the Royal Academy of Fine Arts, The Hague; Bezalel Academy, Jerusalem; and Parsons School of Design, New York; and has exhibited all over Europe and in group shows at the Metropolitan Museum in New York and the Musée D’Orsay, Paris. Els Barents is director of Huis Marseille, Amsterdam's new photography museum. Scarlett Hooft Graafland received a BFA at the Royal Academy of Art in The Hague, the Netherlands and an MFA in sculpture at Parson's School of Design, New York. Solo exhibitions have included Shores Like You, Huis Marseille Museum for Photography, Amsterdam, Holland, 2016; Look! Cook! Look!, Landskrona Museum, Sweden, 2015; Unlikely Landscape, Museum for Photography Seoul, South Korea, 2014; Almas De Sal, Museo Nacional de Arte, La Paz, Bolivia, 2012; Reykjavik Roofs, SIM Gallery, Reykjavik, Iceland, 2004; and Part Time Human, Anadiel Gallery, Center for Contemporary Art, Jerusalem, 2000. In 2019 her solo show Vanishing Traces was at the Fotografiska Photo Museum, Stockholm.

In very good condition with minimal traces of use

Pickup the item in: Dieren