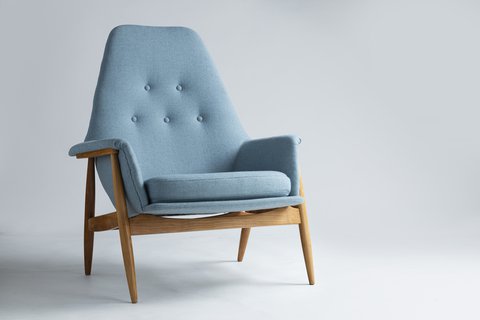 Designer: Gijs Joost van der Grinten Producer: Gelderland Material: beech wood frame Produced: 1950 Dutch design This almost Scandinavian-looking armchair has been completely rebuilt and upholstered in De Ploeg furniture fabric. Materials: wood, steel frame, jute construction, cotton wadding, wool. Gelderland factory: In 1936 Koene Oberman, son of a Frisian timber merchant, received 200 Gulden from his father to start his own business. In Culemborg, which had a long tradition in traditional furniture manufacturing, he was one of the first to start serial production of furniture. With that, 'Furniture Industry Gelderland' was born. From the former locomotive shed at the station, Oberman developed Gelderland into a major player. Shortly after the war, he set out in his own plane to achieve international growth. As a result, foreign manufacturers took Gelderland models into production. In the 1950s, Oberman attracted external designers. Danish design by Ib Kofod Larssen was produced under license and Rob Parry designed various furniture. In 1969 Jan des Bouvrie made his debut as a furniture designer with the Kubusbank. Many designers followed in this tradition, such as Henk Vos and his sons Bart Vos and Roderick Vos, Scholten & Baijings, Remi Meijers, Lex Pot and Studio Truly Truly. In short, Gelderland offers a beautiful sample of Dutch design history. (source site Gelderland) Designer: G.J. van der Grinten Gijs Joost van der Grinten (Venlo, 10 August 1927 Soest, 17 November 2017) was a Dutch architect and the first Dutch professor of Industrial Design. Van der Grinten studied architecture at Delft University of Technology from 1946. He then worked at his alma mater from 1958 onwards, including as an assistant to Prof. Frits Eschauzier, where he researched industrial design courses in Europe. That research contained recommendations that led, among other things, to the establishment of the 'Industrial Design' degree program at TU Delft. In 1962 he was appointed the first extraordinary professor of 'Industrial Design' in Delft. In 2002 the Faculty of Industrial Design Engineering named a room after its founder. He also worked for the architectural firm Environmental Design, with which he won the Prix de Rome in 1954. From 1971, after resigning from university, he devoted himself to violin making. In 2012, he published an autobiography. He passed away in his hometown at the end of 2017 at the age of 90. upholstery: De Ploeg Plow Wool 04 measurements: Height : 98cm Width: 86cm Depth: 72cm

Oh no, you missed out! This item is already sold. We do have many more amazing items available.