38 are viewing this item 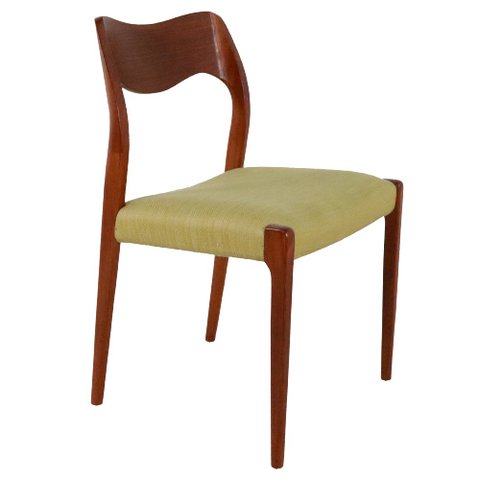 About the designer. Born in 1920 in Århus, the work of Danish designer Niels Otto Møller acquired a reputation for consistent excellence in quality and craftsmanship. Møller's dedication to his craft stemmed from his studies as a cabinetmaker which he completed in 1939, followed by further studies at the Århus School of Design. In 1944, Møller founded his own furniture manufacturing company, JL Møllers Møbelfabrik, in a small workshop in the center of his hometown. While overseeing traditional furniture production in his factory, Møller continued to design himself. The No. 1 chair (1946) was the first result. For the rest of his life, Møller's furniture designs would be produced by his own company. Møller's chairs, such as the sculptural No. 55 and no. 71 (both from 1951), through the choice of materials and the soft curves, strongly represent the Scandinavian post-war vision of practical but well-made and designed design. In 1952, as the company grew, JL Møllers Møbelfabrik started exporting to Germany and the United States. In order to continue to meet the demand, Møller expanded its production facilities. In 1961 he bought a large plot of land in Højbjerg, a town close to his birthplace. There Møller continued to design dining chairs and armchairs in almost sculpted, organic shapes in teak, oak and walnut - all are examples of the post-war Danish modern style. In 1981 JL Møllers Møbelfabrik was awarded the Dansk MøbelIndustri's Furniture Prize, with special mention for his "ability to combine the best craft traditions with modern furniture production." Niels Otto Møller designed and manufactured a large number of chairs and his brand became synonymous with good Danish worldwide. design. This reputation was bequeathed to his children after his death in 1982. His sons, Jorgen Henrik Møller and Jens Ole Møller, continue the business and it is still family owned to this day. this set. This great chair, model 71 is one of the strongest designs of this manufacturer, it is still in beautiful original condition. The entire construction has also been checked. The fabric is light in color and has been on it for more than 30 years, is still completely intact and shows very light traces of use, appropriate to its age, in combination with the beautiful teak wood there is a fantastic chair that belongs to the real design classics, a beautiful jewel for your interior, a stable investment in your home or office. A truly unique chair for the true Mid Century Modern enthusiast! Designer: Niels Otto MøllerFactory: JL Møllers MøbelfabrikModel: 71Height: 80 cmSeat height: 46 cmWidth: 49.5 cmSeat width: 49.5 cmDepth: 50 cmSeat depth: 46 cm.

Pickup the item in: Oss